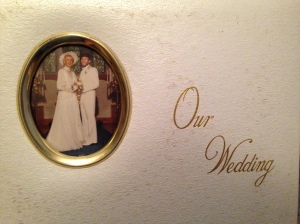 On 9/3/13 we celebrate 30 years of being Mr. & Mrs. Wedekind. After chatting with my mom yesterday and telling her that I was going to be visiting them at the end of next week she said, “It’s nice that Dean “allows” you to do that.” I realized at that moment why we have the marriage we do and why we’re going stronger than ever as “married” at the 30 year mark. Dean doesn’t “allow” me to do anything.  I don’t “allow” him to do anything either. We are in each other’s lives all of the time but the only thing we “allow” each other to do is just be who we are.  That has worked pretty well because the “are” that I am, fits the “are” that he is very well. I tried to explain to my mom that Dean’s just grateful I’m not working so I can see them (and his parents) more often.  It’s been this way for 30 years and that’s got me thinking about why that is.

One thing that’s been SO difficult for me as we embark on year 31, is that I’m such a feminist that the role of the traditional middle aged woman being at home and living off of her husband just sort of makes me want to hit something but in reality, I know it’s not like that for either of us.  That’s probably why when Mom said Dean “allowed” me to do that, it just sounded so odd. We have been in this thing together all the way from the beginning. Our marriage has never been an adventure in keeping score or balancing the scales. It’s just been both of us fully invested as two whole and equal people treating each other as we would want to be treated. We have certainly had plenty of those moments when we both wondered what on earth were we thinking in getting married to each other…and wondering if there could possibly be ANYONE who was any more different than the other. We fought as most couples do but we learned to do it well and do it until we resolved the issue.

It’s definitely been a very REAL 30 years. The last 3 1/2  have kicked our butts with my return to school full time, the move, the jobs, a minor surgery turning into a major ordeal and just doing life together. Things are leveling out again though and it’s finally home here. I’ve got the Vikings game on while I’m writing this because that’s just what I do now. We’ll be celebrating our big day a little early with 3 days in Logan…mostly just looking at “our”  mountains, walking “our” trails,  eating great food and being with some priceless friends. I’m feeling very blessed as I reminisce.