A few years ago when my parents arrived in Yuma, Arizona, for their winter stay, they arrived one evening and the next morning my dad was feeling pain in his chest and down his arm. He and Mom immediately went to the hospital where it was determined he was having a heart attack. It was considered the “widow maker” because of where the blockage was but because he got there very early in the attack, his life was saved. We have all been so grateful for the years we have had together since then. It’s been a difficult spring and summer of 2018 as we’ve learned that there is another issue with his heart that is irreversible.

At present my dad’s heart is functioning at 20% and each day has become a real struggle. In March we were back in Nebraska for our nephew’s wedding. I hadn’t seen Dad since his return from Arizona and when I did, it was very difficult. My dad has always been a tall, big man with unbelievable strength. He is usually the life of the party laughing and joking around. Always eager to play cards or another game of some kind but this visit was different.  He was quiet and tired, napping constantly and coughing a bit. Upon my return to Utah I learned through phone calls with my mom that his cough was worse, he was sleeping even more and incredibly uncomfortable. I hopped in my little red Escape and headed to Nebraska with my own heart feeling like it was in my throat the entire way there.

The day after I arrived, I began to walk alongside my parents in the quest for answers. The cardiologist appointment revealed that Dad’s heart had literally thickened over the last year and as a result the chambers of his heart have become much smaller. After his blood-work was inconclusive he was sent to Omaha for further tests. The end result was that he has amyloidosis, a protein build up in his heart that is very serious and irreversible. His doctor told him were he in his 50’s he would need a heart transplant. Dad turns 79 in September.  I’m really quite devastated and mostly numb knowing that my dad is in the valley of the shadow of death…for real.

So much of who I am is a result of my dad’s wrestling with his life. Dad wasn’t born into economic prosperity. He was born during the great depression to poor farming parents. He grew up working. Always working. At eight years old he would tear apart old cars and put the metal in his wagon and haul it off to be recycled. It earned him some spending money back in the day.  I grew up working. Babysitting, paper routes, cleaning houses, making pizza’s and waiting tables through college. I am my father’s daughter.

A teacher once told Dad that he would never amount to much because he was stupid. That right there made me want to become a teacher to push back against that type of thing happening. I am still mad about that and I’ve known about it since I was a child. My dad struggles to read, write and spell. He is brilliant in mathematics and physics. When I was a kid little blue booklets would regularly come in our mail and night after night Dad would be in our basement working through them. They were courses in engineering. As a result of that work he invented things and started a business that became very successful. To this day, I am always reimagining the world around me and trying to improve it by solving problems. I’d sure love to have words with that teacher and let her know how wrong she was. Dad’s one of the most intelligent people I know and it’s no thanks to her that he continued learning. He’s made me a life-long learner and I’m so grateful. I am my father’s daughter.

There are some really important moments from childhood with Dad that shaped my moral compass. One evening Dad came home after bowling with his league and told my mom within earshot of me that the guys wanted to go over to the bar and watch the go go dancer. He went along but as he sat there he couldn’t help but think, “That’s someone’s daughter.” He even told his buddies to think about that. Then he left and came home. I was never more secure than I was that night. I was proud of my dad. I had no desire to ever go into anything remotely close to go-go dancing and that experience made all of the difference in determining what kind of person I would choose to marry years later. I am my father’s daughter.

Another one of those moral moments was the discovery that after we’d just settled into a house in Billings, MT, Dad determined that he could not stay employed with his new employer. The boss was stealing from the company and he couldn’t tolerate that. We loaded up everything and headed back to Nebraska near his parents. All because Dad had a conscience. It was a wild time but one that really impacted my life. I am my father’s daughter.

Dad was a natural salesman but he wasn’t the kind that would do anything for a sale. He really and truly wouldn’t sell anything to anyone unless they really needed what he had to sell. He was incredibly honest and enjoyed what author Stephen Covey called the high speed of trust from his customers. If he broke it, he fixed it. If he designed it poorly, he redesigned it until he got it right. He was willing to go the extra mile and it paid off. I have been less motivated to work for money than he would have liked but it’s really his fault because I honestly just loved to work. Everyone I worked for knew that I’d go the extra mile too. I am my father’s daughter.

Growing up I watched my dad interact with other people and it was very evident that the color of a person’s skin or their economic status had very little to do with how he treated them. I’ve seen him with Sioux Native American friends, African American friends, rich and poor friends. We had many casual and I now know, philosophical, conversations about others when I was growing up. He was always thinking and challenging the status quo where other people were concerned. He recognized people for their strengths, their character and treated people so fairly. He always had a heart for the underdog. I am a devoted advocate for equality and justice for all because of him. I am my father’s daughter.

Honestly, I could go on and on about the way I’ve been shaped by my dad. I could also go on a bit about the hard things between us because there were a few. We certainly didn’t live a perfect father-daughter life and boy did we have our power struggles. I could push his buttons like no other and I did just that plenty of times. I’ve been so mad at him I could have spit nails more than once, but I’m pretty sure he could say the same about me. Yep, I’m my father’s daughter. Just ask my mom.

It’s so hard to see and experience this man’s struggle right now. He’s never been weak and tired like this. He’s struggling to breathe and sleep. I don’t know how much time I have left with my dad and it’s pretty much on my mind 24/7. My ache for my mom is constant and I feel so powerless. I suppose we all feel this way when the end of life seems to be coming at warp speed for someone we love so much.

I love my dad. 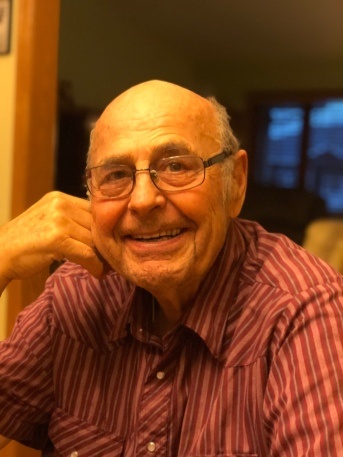 He gave me a frown first and when I squawked he gave me this face.

Buzzing around Yuma with him was so fun.