As we’re heading fast into the 2020 election season, I need to get something out there. I have been a relentless foe of this POTUS from the get go. I’ve blogged about him numerous times and daily attempt to use Facebook and Twitter to post truthful accounts of the realities we are living with since this man was elected and has attempted to lead our country.  I have simply refused to let go of just how serious I believe it is that we have elected someone like Donald J. Trump and that he is enabled to continue. I don’t think HE is actually doing the work of POTUS. I think instead, that other, more self-assured people in his orbit are.

In my opinion, the horror of a leader like Donald J. Trump is first and foremost that he has no locus of control, no center with which to govern from. I have a zillion issues with what has happened the Republican Party where I spent most of my years as an active citizen but nothing is as serious to me as this. President Trump literally has no sense of self possession. Though full of narcissistic bravado his real genuine sense of his own self is almost completely absent. In other words, when one thinks about the way healthy human beings develop, there is little there to imagine that his growth and development was healthy enough to achieve the milestones necessary to be able to direct his life based on maturely developed core values.  According to Maslow’s Hierarchy of Needs we discover this central place of control in our lives as we begin learning from our parents and move into a place called self-actualization. (see below) 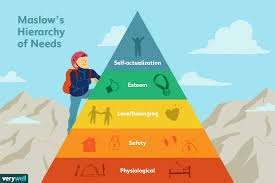 Of course, this process doesn’t begin in a sequential manner as if we’re jumping through hoops to get there. It’s more of a natural progression in a healthy person’s human development. Consider if a new baby experiences severe oxygen deprivation during birth.  That baby is likely to become a human being with little or no actualized sense of personal actualization. The person will grow and only want to be fed, to be safe, loved and to belong, but beyond that, a conscious sense of self control and self direction will be very unlikely.

I am not sure why it is true, but it is daily obvious that in spite of President Trump’s needs being met in the lower half of this triangle, the one thing he didn’t seem to reach maturity in, is the peace and security of life in his own skin. He continuously needs validation from his base and others in his circle to assure him he’s doing a great job. Do you believe that he genuinely knows that he’s done good work? That he knows he’s a smart, intelligent leader? If you do, what do you see that affirms that to be the case. Ask yourself, why he must say so out loud all of the time.

One of the most obvious conditions of someone without a developed sense of their own real self is that they are driven by the moment in an unhealthy way. They are not necessarily present in the moment, they are always, always looking for validation from others in the moment. If self assurance was an actual fluid, a person with a severe deficit would need a 24/7 IV infusion of it.

Most of us are on a journey of self possession. Knowing ourselves, understanding our core values, living self assured lives etc. is all a growth process. It has a lot to do with what happens to us from conception to the grave. There is no one size fits all approach. Some of us have had to do a whole lot of therapy to figure out why we don’t have comfort in our own skin and figure out how to grow into it.  Some of us work hard to parent our children to develop a strong sense of self in them.  When self possessed people face hard times, they look first into their own life, evaluate their own behavior, learn how to own it and how to alter it so that in the end they become better people. For whatever reasons, President Trump doesn’t know how to face his hardships in a mature way. Take a gander at his Twitter feed if you’re not convinced.  He simply cannot do it.

This is the single most important reason why I oppose this man being our POTUS. In a position like this, a self actualized person would be humble enough to seek counsel. He does not seek counsel. He seeks enablers. He does not have genuine friendships. When a relationship doesn’t hold him in high esteem and meet his deep need for validation in some way, that relationship ends. He fires anyone who opposes him. He copes with dissent through verbal abuse and mistreatment.

It is terribly sad that people reach the age of the Donald and haven’t figured out how to grow up, but more importantly, it is terribly dangerous when these people are in leadership. Cabinet members, lawyers, White House staff, a plethora of personal acquaintances and most of all the Press have been verbally beat to hell and thrown under the proverbial bus because they dared to stand up to him. Consider is this. If someone with this level of immaturity possesses our highest office  and becomes desperate enough,  what’s to say that throwing our entire country under that same bus is  beyond him?

I know that many of my Evangelical friends and family believe that if Jesus is in a person’s heart, the only self that is important is the Jesus self. The only way to growth as a human being is growth in Christ. I believe that this one things is blinding followers of Jesus to the reality that an empty soul is leading this country.  One can grow  in Bible knowledge, church attendance and/or missionary work but no one grows in Christ without facing hard truth about themselves, no one.

Luke 2:52 says, “Jesus grew in wisdom and stature, and in favor with God and man.” I strongly believe Donald J. Trump is incapable of this kind of growth and therefore, is a very dangerous man to hold the office of President in the United States of America.